It Never Hurts to Ask

While visiting Cedars School last year, one of the many lessons that I learned from their teachers, was that it never hurts to contact App developers. I remember Alison telling me how they had contacted the developer of the Toontatsic App to ask them to make some modifications. To my surprise the developer worked with Cedars and made the adjustments...

Fast forward about six months and we finally had an opportunity to contact a developer. We had purchased the Magnabet App and noticed that it had a variety of punctuation marks for students to use, but it did not have a "period." I told the teacher that I was working with that I would contact the developer to see if they can add the period....it never hurts to ask, right? Well...later that night, I emailed the developer and less than 15 minutes later I received the following response...SCORE!

I was so excited that I emailed my teachers to let them know what took place and to encourage them to do the same.

On Monday, I received the following email from our Language Arts coach about contacting the developers of the Book Creator App...

Of course, I was SUPER excited for her! Here is the response she got from the developer... 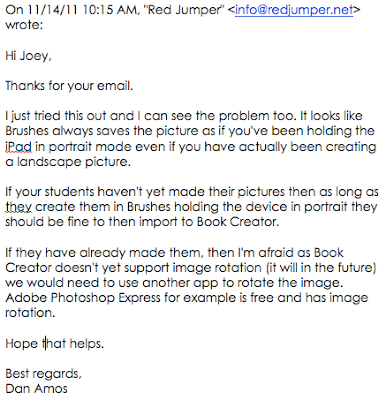 And another response she received from Dan...

Some of My Journeys